How to Make and Preserve Monkey Butter The vast majority of food borne illnesses occur because of unsafe handling practices.  In most cases, exposure to harmful bacteria that causes us to become sick can be reduced or eliminated by following some accepted guidelines.  Let’s take a look at some simple steps that you can take in order to safely handle poultry products, even if you are preparing the meat out in the field during a survival situation. 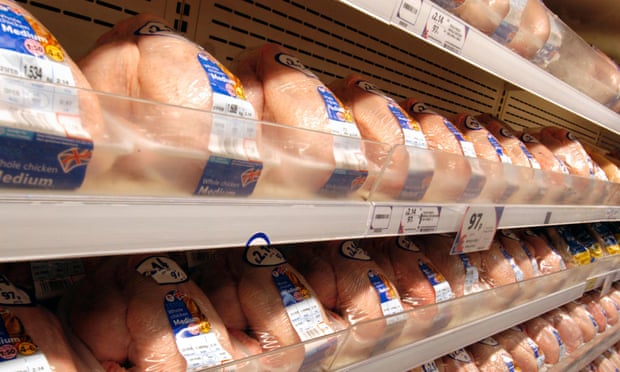 Certain types of bacteria are common in chicken meat, and they are only killed off by cooking the poultry to a certain temperature.  Most bacteria thrive in temperatures between 40 and 140 degrees Fahrenheit, and freezing the meat won’t kill them off.  It is also important to remember that bacteria can grow on the meat in transit or when it is being defrosted.  It can also grow on meat that is removed from refrigeration long enough to warm up.  Putting the meat back in cold storage will not always kill off the newly-formed bacteria.

The most common bacteria are staphyloococcus, camplyobacter, E. coli and listeria.  All of them can cause severe gastrointestinal problems, diarrhea, dehydration and secondary infections that may create a range of health problems that can be anything from minor to fatal if not treated properly.  It is important to ensure that all areas and objects that have come in contact with raw poultry meat, juices or packaging are properly cleaned and sanitized before working on anything else. You should avoid washing raw poultry, even if it seems counter-intuitive.  Washing the meat can cause bacteria to get into sinks and water as well as cross-contaminate utensils, dishes and food preparation areas.  It’s better to cook the poultry as-is because the only thing that will kill off any bacteria is heat.  It’s also important that the meat gets from the store to your refrigerator, freezer or cooler with ice as quickly as possible.  Remember that bacteria starts to grow on poultry that is warmer than 40 degrees.  Keeping it refrigerated will inhibit growth, but it will not kill bacteria that is already present on the meat.

You should never transfer the poultry from one bag to another, and discard all bags immediately after removing the meat.  You never want to use bags on other things if they were used to transport poultry.  You also want to remove the meat from the packaging near to where you will be heating it in order to reduce the chances of spilling the juice or remaining blood onto surfaces, utensils or cooking implements. It’s also important to wash any utensils or other objects that came into contact with the raw meat or juices.  Use bleach for surfaces and an antibacterial soap and hot water for dishes, cutting boards and knives.  Never place other food items near surfaces or objects that contain raw poultry or juices.  It’s also important that you avoid using contaminated objects to prepare other foods as well.  Remember that it’s better to be over-paranoid than to unintentionally expose yourself to harmful bacteria.

You also want to cook the poultry to a temperature of at least 165 degrees under all circumstances.  This is the accepted standard, even if you see a different cook temperature in a recipe somewhere.  If you don’t have a meat thermometer, you can estimate the “doneness” of the meat by looking at its texture and color.  It should be white, or colored if dark meat, cooked evenly through with no signs of soft, moist flesh embedded in the product.  Meat that isn’t done will not be as firm as cooked poultry, and all traces of pink should be gone even if parts of the meat are at or above 165 degrees.  It’s always better to err on the side of caution by slightly overcooking poultry.

Fresh poultry can usually be stored in the refrigerator for two to three days before cooking.  Frozen poultry can last indefinitely if temperatures are consistently below zero and the product is packaged properly.  The meat should be cooked as quickly as possible if it was exposed to an interruption in freezing or refrigeration.

Keep in mind that refrigeration will probably not be on your mind if you are facing an off-the-grid survival situation.  However, the same principles of sanitation to avoid cross-contamination apply.  Make sure to cook the meat quickly and thoroughly keep surfaces and implements clean.

Remember that the vast majority of food borne illnesses stem from the improper handling and storage of poultry.  Following these steps, along with frequent hand washing, will help you to avoid bacterial buildup that can spread, contaminate other foods and make you and your family sick.