How to Build a Sustainable Seed Vault

Tips for Choosing Your First Firearm Corn is a fantastic source of carbohydrates, vitamins, antioxidants, fiber and is a great filler that can be used between meals.  Canning it for long-term storage is not something that a lot of people think about, but it’s entirely possible as long as you follow some basic guidelines.  Take a look at the steps below and see how easy it is to build a long-term stockpile of this staple food.

You will need a lot of corn to process a full load in your pressure canner.  Expect to use around five pounds of corn to fill up a single quart jar.  However, doing it in bulk at a time when corn is cheap and abundant makes stocking up easy and practical.  Choose corn that it as fresh as possible, and always use corn that is still in the husk. The first step is to remove the husk and as many of the fibers as possible.  You want the jars to be full of nothing but fresh and delicious kernels when they are processed, and getting rid of the hairs is easier to do in the beginning than later on.  Start boiling a large stockpot of water while you are husking the corn so they can be immediately par-cooked in order to preserve as much freshness as possible.  Place the cobs in the water and blanch them for about two minutes.  This isn’t a requirement, but it will give you a nicer, crisper finished product. Remove the cobs from the water and allow to cool before scraping off the kernels and placing them in a large bowl or pot.  Try to be careful in order to keep as many of the kernels intact as possible.  If you are planning on processing a lot of corn on a regular basis, you can purchase a stripping tool that is specifically designed to remove the kernels.  You can also use an electric knife to quickly remove kernels as well.  Otherwise, you can use the old fashioned method of cutting off the kernels in little strips.

In any case, start preparing the jars and canner once you have removed all of the kernels. 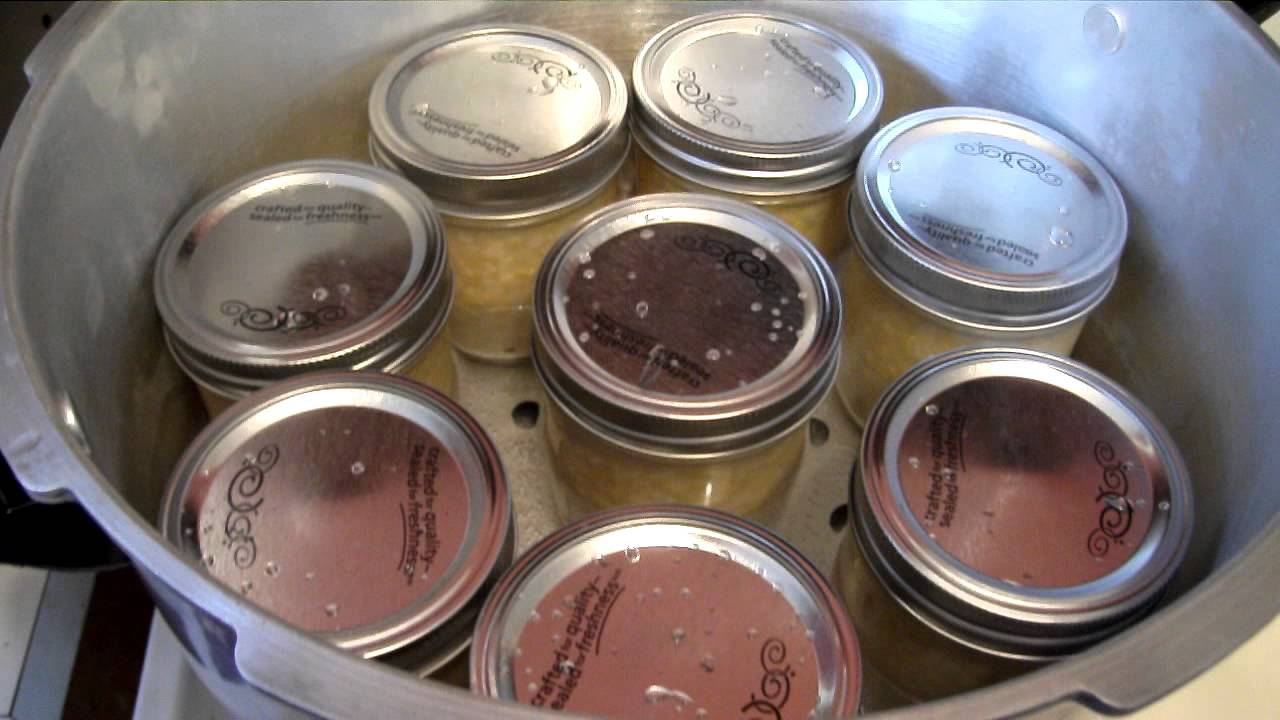 You can either hot or raw pack the kernels depending on your preferences.  If you decide to hot pack them, simmer the kernels in water for about five minutes before placing them into clean mason jars.  Fill the jars until an inch of headspace remains and cover with the water you used for simmering until the kernels are covered.  For raw packing, fill the jars with kernels until an inch of headspace remains and pour boiling water over the top until they are covered.  Wipe down the rims of the jars to remove any debris or residue.

Attach the lids and bands to the jars and place into the prepared canner.  Attach the lid and allow to vent for 10 minutes before securing the gauge.  Processing times for quart jars is 1 hour and 25 minutes.  Pint jars need to be processed for 55 minutes.  Make sure that you follow pressure guidelines for altitude to ensure that the jars are properly processed.

Once the jars have been processed, turn off the heat on the canner and allow to depressurize to zero before opening.  Remove the jars and let them cool to room temperature.  Check the quality of the seals and ensure that they are intact.  Label and date the corn and store in a cool and dry place.  Expected shelf life of canned corn is anywhere from 2-5 years according to the FDA.  However, they should be consumed within 5 days if opened and stored in the refrigerator.  Eat the corn the same day and discard the rest if the leftovers will not be refrigerated. The hardest part of canning corn is cutting the kernels off of the cobs.  However, it is worth the effort to build a long-lasting supply of this staple product.  Try it for yourself and see how home-canning corn can save you a lot of money as opposed to buying commercial products.  You can also avoid the additives and preservatives that are common in store-bought canned vegetables as well.