Priorities of Survival, Rules of 3

There are several rules basic to survival. They’re known as “survival rules of three“. You can survive 3 minutes without oxygen, 3 hours without shelter, 3 days without water, 3 weeks without food, 3 months without hope. I go into some detail on each in this video. Everyone has a different ability to cope with hardship and as a result some could last longer than others. 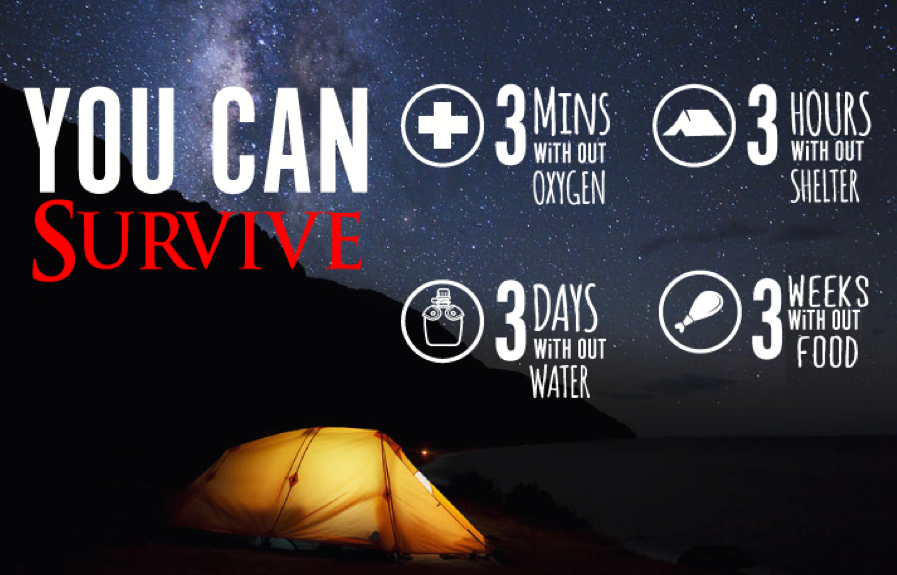 Making fire is recognized in the sources as significantly increasing the ability to survive physically and mentally. Lighting a fire without a lighter or matches, e.g. by using natural flint and steel with tinder, is a frequent subject of both books on survival and in survival courses.

A shelter can range from a “natural shelter”; such as a cave or a fallen-down tree, to an intermediate form of man-made shelter such as a debris hut, a tree pit shelter, or a snow cave, to completely man-made structures such as a tarp, tent, or a longhouse.

A human being can survive an average of three to five days without the intake of water. The issues presented by the need for water dictate that unnecessary water loss by perspiration be avoided in survival situations. The need for water increases with exercise. The U.S. Army survival manual does not recommend that you drink water only when thirsty, as this leads to under hydrating. Instead, water should be drunk at regular intervals.

With the exception of leaves, these foods are relatively high in calories, providing some energy to the body. Plants are some of the easiest food sources to find in the jungle, forest or desert because they’re stationary and can thus be had without exerting much effort.  Skills, and equipment (such as bows, snares and nets) necessary to gather animal food in the wild include animal trapping, hunting, fishing.

Many mainstream survival experts have perpetuated the act of drinking urine in times of dehydration. However, the United States Air Force Survival Manual (AF 64-4) instructs that this technique should never be applied. Several reasons include the high salt content of urine, potential contaminants, and sometimes bacteria growth, even though popular belief is that urine is “sterile”.