How to Remove Fingerprints From Various Surfaces

How to Build a Self-Watering Tomato Planting System We often don’t think of fish as being toxic to humans,  but there are a handful of species that can inflict serious pain or inject a fatal dose of venom.  Fortunately, incidences of attacks by toxic fish are not as common as jellyfish stings, but they do happen.  Let’s take a look at what fish are best to be avoided in order to reduce the chances of becoming a victim.

The first thing to consider is that there is a difference between something being toxic or poisonous, even if we tend to use these words interchangeably.  Toxic creatures inject a substance into the body that causes a harmful reaction.  We tend to call this stuff venom.  Poisonous creatures do not need to insert venom into the body to cause harm.  Simple, casual contact is usually enough to spur a reaction.  Think of toxic in terms of getting an allergic reaction from a bee sting.  Think of exposure to poison from walking through poison ivy.

The puffer fish is considered to be the most poisonous fish and second-most poisonous vertebrate on Earth.  Serious illness or death can occur after exposure to as little as 2 milligrams of tetrodotoxin, the compound that the fish carry.  Tetrodotoxin is a neurotoxin that interferes with signals from the brain to the nerves throughout the body.  Exposure can lead to paralysis, weakness, respiratory failure or cardiac arrest.  What makes the puffer fish particularly dangerous is that you can get exposed to tetrodotoxin from handling or getting stabbed by one of the spines on the fish, or exposure can come from eating fish that has not been properly prepared.  The compound is concentrated in the liver, intestines, ovaries as well as the skin, so avoiding the fish altogether is probably the best course of action to take.

The stonefish has the ability to rest on the sea bed and mask itself with the surrounding terrain.  They resemble a stone, which makes them particularly adept at hiding from predators.  However, they are also easily confused with stones and pieces of coral that can accidentally get stepped on or picked up.  The fish has a defense mechanism that extends sharp spines from its back, pierces the skin and injects venom.  Once injected, it causes severe pain, swelling, temporary paralysis, tissue and muscle death and also death in some victims.  One of the easiest ways to avoid being jabbed by a stonefish is by shuffling in the sand near rocks instead of walking. The lionfish competes with the stonefish in terms of their toxicity.  This fish has spines that protrude from many areas of the body, providing ample defensive coverage against a predator.  Lionfish venom produces symptoms as severe as the stonefish, in addition to also causing the cardiovascular system to go haywire and potentially stop working altogether.  Lionfish are becoming increasingly common in the Atlantic Ocean and Caribbean. 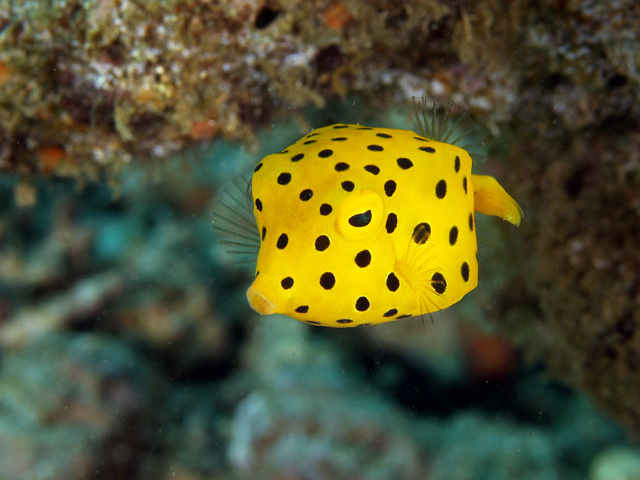 These bright yellow fish with black spots puff up into the shape of a box.  When they feel threatened, they release a cloud of poisonous compounds that adhere to the skin of nearby predators.  This poison can break down blood cells and cause a huge range of problems as a result.

Stingrays are considered fish, and they are probably the most common threat to humans in North America.  People get stung by getting struck by their whip-like tail that has sharp barbs which inject a venom that causes severe pain, inflammation, redness, tissue and localized nerve damage.   In some cases, enough venom can be released to cause severe cardiovascular problems.  The best way to avoid stingray attacks is to shuffle in order to kick them free from where they burrow themselves in the sand to hide.

There are many other species of fish that are poisonous to humans, but these rank as the most common that people come into contact with.  Part of the problem is that most of these fish are beautiful and have bright colors or intricate designs on their bodies.   Consequently, it’s difficult to resist the urge to get close and even handle them.  Don’t.  Avoid them at all costs, and always remember to make sure that you are aware of dangers posed by marine life in areas where you plan on being in the water.